Save the treasures of Nubia; Unesco launches a world appeal

For countless centuries the Nile has given life to the lands through which it flows. Today, the inhabitants of these lands, who are increasing rapidly in number, must ask their mighty river to give more than in the past. The High Dam which is soon to rise at Aswan will usher in a new era of economic progress destined to provide more food for millions of people.

These are the people to whom we owe one of the greatest civilizations in history. On the banks of their river they raised edifices the beauty and grandeur of which have never been surpassed. But with the new dam a vast lake will be created in Nubia, a lake which threatens to engulf some of the most glorious of these monuments for ever. An agonizing dilemma therefore faces the authorities charged with developing the Nile Valley: how are they to choose between the needs and welfare of their people and the treasures which belong not only to their country but to humanity as a whole?

The authorities are fully aware that they are the depositaries, before all the world, of the monuments of the Nubian Valley, and they are eager to ensure their safeguard. It is these motives which led the United Arab Republic and the Government of the Sudan to appeal to UNESCO for the purpose of obtaining the international aid which is indispensable.

As soon asl received these appeals, I recognized that UNESCO could not possibly fail to respond. The action it is being asked to undertake is in full conformity with the essential objectives of the Organization. We cannot allow temples like Abu Simbel and Philae, which are veritable gems of ancient art, to disappear; nor can we abandon forever the treasures which lie buried in the sand on sites not yet systematically excavated.

Here is an exemplary occasion for demonstrating the international solidarity which UNESCO has been striving to make a reality in all domains. No one, indeed, can deny the urgency of this cause and the effort required, or the need for sharing the burden among as large a number of countries as possible.

Moreover, in return for the international assistance given, the Government of the United Arab Republic is offering not less than fifty per cent of the finds excavated in Nubia, authorization to carry out further excavations in other parts of Egypt, and the cession of precious objects and monuments, including certain Nubian temples, for transfer abroad. The Government of the Sudan, for its part, is offering fifty per cent of the finds from excavations to be made in its territory.

An International Consultative Committee will be responsible for advising the competent government authorities on the plans for prospective excavations, on the use made of financial contributions, and on the distribution of counterparts offered by the United Arab Republic.

There can be no doubt that the preservation and excavation operations which can, and must, begin within the next few months, will provide a new impetus to archaeology. The history of civilizations, religions and art, and our knowledge of prehistoric times will be immeasurably enriched as a result.

At my proposal, the Executive Board of UNESCO has decided that I should issue an appeal for international co-operation. This appeal, which I intend to launch in the very near future, will be addressed not only to governments and to the public and private institutions concerned, but also to public opinion in all countries of the world.

A group of Patrons and an International Action Committee will support UNESCO in this world campaign. I feel certain that all those who clearly understand what is at stake will wish to participate, for they will recognize that an unprecedented task calls for an unprecedented effort. 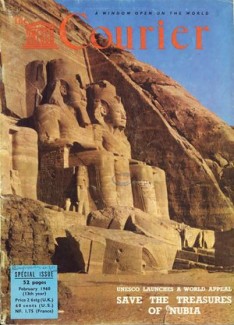