Mozart and the Enlightenment: the mystery of genius

Of their time and at loggerheads with it, with one foot in their century and another in eternity, rooted in a particular geographical setting but also possessed of a universal dimension, geniuses are impossible to pigeonhole. To what spacetime do they belong? Given that genius essentially defies all explanation or definition, can we at least say something about the context in which it has its being? This is the question to which the present issue tries to find the beginnings of an answer. Our aim has not been to establish a typology of genius in general or to draw a portrait of that exceptional genius whose bicentenary is being celebrated this year. What we have tried to do is to make our own modest contribution to the casebook by touching on some of the paradoxes that characterize genius.

The figure of Mozart, a composer whose genius was long denied or at least underestimated before being universally acclaimed, seemed to us to chime perfectly with our attempt to throw a little light on what might be called the truthor rather the mysteryof genius. Mozart cannot be dissociated from the Europe of the Enlightenment whose best qualities he exemplifies. Whether in respect of musical composition or of the movement of ideas, he was a man in the vanguard of his time.

What other genius epitomized to such a degree, in his own creative field, all the knowledge of his period? True, Mozart was singularly encouraged by his family. At a very early age, in the course of his travels, he mastered all the major European musical forms, harvesting with amazing sureness whatever suited his purposes wherever he found it. However, this faculty of assimilation, this power of creative synthesis, rare as it is, cannot by itself provide an adequate definition of genius. For an artist to be a genius, he also needs to be in the forefront of all the intellectual currents of his time.

Mozart was not a revolutionary, but he was a fervent Freemason. Philanthropic, philosophical, wedded to the idea of progress and reform without violence, Freemasonry was a cosmopolitan humanism whose ideals Mozart espoused against the intolerance and injustices of his century. That being said and no matter how aware he may be of contemporary issues, a genius does not simply hold up a mirror to the age.

Unclassifiable, unforeseeable, genius spreads its wings far and wide. A genius is one whose work finds an echo in other, increasingly remote periods and cultures, meeting a response in the minds and hearts of people who are more and more at a remove from it. He then transcends the infinite variety of the languages, customs and concerns of the peoples of the world and strikes the chord of their common humanity.

Mysteriously, he achieves universality. And in a sense his contemporaries make him pay dearly for it. Mozart ended up by alienating Viennese audiences. Those who, during his lifetime, were capable of appreciating his works at their proper value were very few. In the nineteenth century his star seemed to have set. Now at last his true stature is recognized, but it has taken almost 200 years.

Discover other issues on music in the Courier 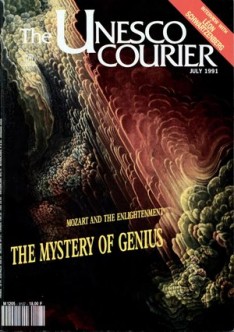