Youth with a purpose

The problems facing the young people of today are a matter of worldwide concern and indeed urgency. Of course it can be said that to some extent all the characteristics of present-day youth, their attitudes and psychology and behaviour, their tremendous pent-up energy which can overflow into generous altruism or blinding violence, are not so very different from the character of any younger generation.

But never does youth offer as faithful a picture of its true spirit or show its virtues so strikingly or its faults so glaringly, never are the talents of youth so richly exploited or youth's love of risk put to greater test than when the world itself is in a state of rejuvenation as it obviously is today. And it is this surge and momentum in all the manifestations of youth today, intensified by the throbbing, accelerated rejuvenescence of the world itself that is, in my opinion, the key ponderable of our time. The statisticians inform us that young people under 25 years of age make up more than half the total population of most of the developing countries.

These young nations which have now emerged on to the stage of history are youthful not only because their emancipation is so recent. Intrinsically, they are far more youthful by virtue of the fact that the development and leadership of these nations is in the hands of the rising new generations.

As for the so-called developed countries, where the infrastructure of society is well established and the nations are in a much better position to absorb their rising populations, it is inevitable I mean mathematically inevitable that the young people will be called upon to assume an increasing role in national growth and expansion since as is well known technical knowledge is advancing with such giant steps that yesterday's technology is often out of date by today.

Explore the world of youth in 1965. Download the PDF.

Discover other issues on youth in the Courier. 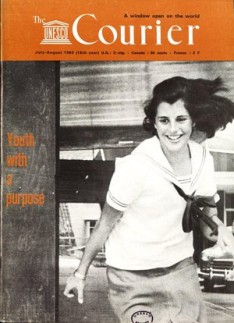