Five years ago, on April 12, 1961, Yuri Gagarin whirled into orbit around the earth and became the first man in space. We open this issue devoted to international co-operation in space research and exploration with statements addressed to the Unesco Courier by two famous astronauts: Yuri Gagarin and Walter Schirra. In 1962, Walter Schirra accomplished a solo spaceflight and in 1965 he was one of four astronauts who made the first manned rendez-vous in space.

Yuri Gagarin: On the occasion of the 5th anniversary of the first manned space flight, I greet all who work in the field of space research, and especially my colleagues, the American and Soviet astronauts. The age of cosmic flight and bold research ventures in the far reaches of space has begun. I am firmly convinced that greater internationall co-operation is needed for the mastery and utilization of outer space so that each manned flight and each launching of a space station or laboratory for cosmic research can serve man in positive and peaceful ways.

Walter M. Schirra : It is perhaps an obvious fact, but nonetheless an important one, that there are no boundaries a hundred miles up, and there are none visible on earth when it is viewed from a space capsule. That the exploration of space goes beyond political boundaries was no doubt in the minds of the framers of the Space Act of 1958. The act which established the National Aeronautics and Space Administration (NASA) and dedicated our nation to the exploration of space included as one of its objectives co-operation with other nations and groups of nations in the peaceful applications of our space efforts.

Man in space: A great international venture, by A. H. Abdel-Ghanî

It does not matter who reaches the moon first; what counts is the benefit to man, by Anatoly Blagonravov

Joint enterprises are now a going concern in the exciting field of space research, by Arnold W. Frutkln

Space flight and the rule of law, by Eugène Pepin

Why we are outward bound, by Konstantin Feoktistov

Photo on the cover: Astronaut's view of space and earth photographed from Voskhod (Sunrise) I capsule during a 24-hour flight on October 12, 1964. Ghostly polygons of light are caused by rays of sunlight reflected on spacecraft window. Piloted by Vladimir Komarov, Voskhod carried the first trained scientists to venture into space Boris Egorov, a research physician, and Konstantin Feokistov who took this photograph, and whose studies in space included observations of the different layers of the atmosphere. 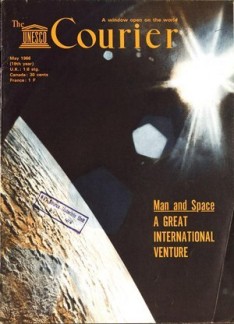