It is no mere accident that the human race lias been given the name Homo Sapiens. Women make up half of humanity and in many countries outnumber the men. Yet for centuries they have been treated as inferior beings. They have been hewers of wood and drawers of water; they have worked harder for a smaller material reward and enjoyed a humbler status in the eyes of society. They have received less education, have had less protection before the law, and have been denied even the most elementary civic rights. Some women, it is of course true, have had more noble, more important roles.

Down through the ages there have been queens and women rulers. Hut almost always the story has been the same : either virtual serfdom or royal status. The notion of equality, of women recognized as citizens on an equal footing with men is a totally new concept which rightfully belongs to our pre¬ sent century. It is a long step from the Roman woman held in perpetual tutelage to England's Mary Wollstonccraft and her "Vindication of the Rights of Women" published at the close of the 18th century.

It is perhaps a longer step from the woman in her home among her children to the woman executive or the woman delegate at an international congress, acting on an equal basis with her male colleagues. Countless women have taken this last step in the past 50 years and many more will certainly take it in the years ahead. The equal status of women is now recognized by a large number of countries. Women's rights are affirmed in the Charter of the United Nations and were proclaimed for the entire world in the Universal Declaration of Human Rights, adopted seven years ago, on December 10. 1948 : "Free and equal in dignity and rights... " "without distinction of any kind such as race, colour, sex..."

In its Constitution, Unesco's purpose is defined as promoting collaboration among nations through education science and culture "in order to further universal respect for justice, for the rule of law and for the human rights and fundamental freedoms... without distinction of race, sex, language or religion." To realize this purpose, the Constitution adds, Unesco will "give fresh impulse to popular education and to the spread of culture... by instituting collaboration among the nations to advance the ideal of equality of educational opportunity without regard to race, sex or any distinctions, economic or social..."

On the occasion of Human Rights Day 1955, the Unesco Courier devotes this issue to a report on the progress made by women in recent years in their struggle for equality with men.

See other women's issues in the UNESCO Courier

Discover other issues on Human Rights in the UNESCO Courier 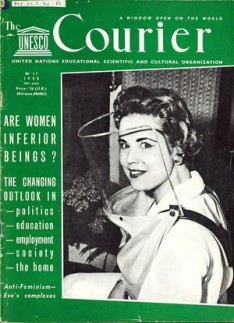