UNESCO is responding resolutely to the United Nations appeal for support following the act of aggression in Korea. This action was decided on at a meeting of the Organization's Executive Board at the end of August. It is significant that the 18 members of the Board, who act as individuals and not as representatives of governments, were unanimous in "deplormg tie violation of international law" and in adopting a programme of immediate and long-range action.

UNESCO has already formulated plans to send a mission of enquiry to Korea if and when requested by the UN, to investigate the civilian needs of the population and to determine how UNESCOcan best aid relief and reconstruction.

But to achieve this unified action it is vital that information and educational materials concerning the United Nations action for collective security reach the peoples of the world. The programme, approved by the Executive Board, is designed to bring the message of the United Nations to schools and universities in dynamic form. UNESCO will concentrate its efforts to make known the principle of collective security and to show by concrete examples taken from world events and particularly the Korean question, the world importance of the work of the United Nations.

The decisions of the Executive Board have been made in conformity with the Constitution of Unesco. Among its main tasks the Basic Programme of the organization sets forth the following : "to bring about better understanding among the peoples of the world and to convince them of the necessity of cooperating loyally with one another in the framework of the United Nations."

The Director-General of UNESCO made UNESCO's position clear recently when he stated: "In condemning aggression wherever it appears, Unesco is not impelled by any party spirit but adopts an attitude consonant with the notion of peace within the law which its constitution proclaims. Far from being an instrument of ideological war, our Institution is first and foremost an organ of education for the peace under the law. The activities we can undertake as a result of the events in Korea fit into the framework of our normal programme. They consist in sharing, to the full measure of our abilities in the reconstruction of Korea, just as we are already con tributing to that of many war-devastated countries, and helping to show, by our teaching about the United Nations, the value of collective security in the face of any aggression."

Find more issues and articles on Korea in the Courier. 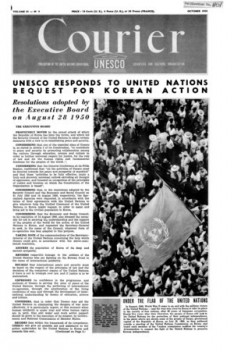