Strangers on the screen

Since Homo sapiens first trod the earth some five hundred thousand years ago mankind has been torn between an instinctive fear of the unknown and an unquenchable thirst for knowledge. For early man all that was unknown was hostile. The unseen was a menacing presence that lay in wait for the unwary. Only within the familiar ordered confines of the clan was safety to be found.

Today the bounds of the known world have been extended to their limits, the frontiers of knowledge have been pushed back and contacts and exchanges with others have multiplied beyond all expectations. Everywhere men have come to acknowledge the existence of their fellow men and the destinies of communities and individuals have become interlinked on a worldwide scale.

The cinema, one of the major art forms of this century, has played an important role in this process and in making us more fully aware of the diversity of the human condition. It has shown us the splendours of the Taj Mahal and the Pyramids, the onion-shaped domes of Moscow, the temples of the Maya, the skyscrapers of New York. We have seen great cities devastated by earthquake, fire and flood, peoples decimated by famine and all the man-made horrors of war. We feel that we are beginning to know what other peoples are like, what they love and what they fear.

Nevertheless, even today, "others" too often continue to be, if not totally unknown, at least strangers and potential enemies. For this too the cinema bears some responsibility. The eye behind the camera sometimes sees and records happenings that seem to confirm our deeply-ingrained prejudices. It would seem that we still feel threatened by "others", that the need remains to continue to set up boundaries, to draw demarcation lines, to mark out for ourselves and for our kind a clearly defined territorywhether physical, spiritual or psychologicalfrom which "others" are excluded.

We need not despair. More and more film-makers are rejecting facile, stereotypic representations and showing us the kinship that underlies the glory and the wonder of the human pageant. The barriers of taboos and fears are being torn down to reveal "others" miraculously transformed into "brothers". 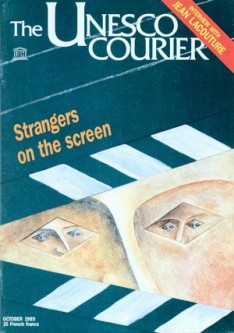