The Automobile: machine and myth

The automobile is the supreme emblem of modern societies. On the one hand it holds a powerful appeal to the imagination. On the other it is a mainspring of industrial economies. It has helped to determine the way of life of millions and to shape patterns of individual and collective behaviour that are, for better or worse, characteristic features of our century.

The world's leading car manufacturers such as Daimler-Benz in Germany, Citroen in France and Ford in the United States, were trail-blazers of capitalism. By introducing mass production on a moving assembly line, Henry Ford reduced costs and turned what had been a luxury for the few into a product that the many could afford.

If the demand for automobiles grew so rapidly that within a few decades the auto industry was the driving force of market economies, it is because the car embodies so many of the needs, longings and fantasies of modern men and women, especially the dream of freedom of movement at speed in a self-propelled vehicle-horsepower without the horse.

What future lies ahead for this offspring of the marriage between dream and industry? How serious is the risk that we may destroy the car's potential as an instrument of freedom by becoming its slave? 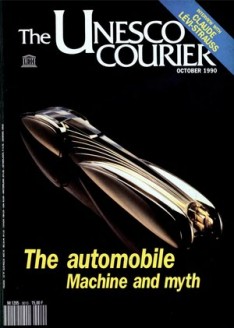