In June 1989, the three-master Messager de la ville de Nantes left the Breton coast to sail to Dakar, Fort-de-France and New York. On board were a dozen young people of different nationalities, aged from twelve to sixteen. They were joined by about fifty more on the island of Gorée, offshore from Dakar, and a third batch boarded the ship in the West Indies.

The children came from five continents, notably from the regions of the South. The voyage had a twin symbolic purpose: to retrace the old slave route from Africa to America, and to permit joint reflection on the main articles of a projected Convention on the Rights of the Child. At journey's end, the children went to United Nations headquarters in New York to present the Secretary-General, Mr. Javier Pérez de Cuéllar, with a petition they had written, requesting that the project, under consideration since 1959, should finally be ratified.

The Convention, which was eventually adopted by the General Assembly of the United Nations on 20 November 1989, fills a major gap, for hitherto children and young people had no legal rights before reaching the age of majority. This, moreover, is a time when growing numbers of them are deprived of parental protection and the security of a family, being literally thrown out onto the streets as a result of wars, famines, catastrophes or population movements. More insidiously, others suffer as a result of economic changes which tend to destroy community structures and marginalize the poorest and weakest sections of society.

It is important that the international community should give serious attention to the question of the global status of children and should do its best to find a morally and judicially satisfactory solution to the problems posed. In this respect, the voyage of the Messager, undertaken by youngsters many of whom had themselves endured years of hardship, has great symbolic significance, especially since the venture symbolically linked the misfortunes of today's endangered children with the suffering of slaves in a previous epoch. With the passing of the centuries, the struggle to affirm human dignity has passed into ever younger hands.

The UNESCO Courier's contribution to this theme takes the form of case studies from different countries and an analysis of the Convention on the Rights of the Child. The articles were written by adults; illustrations by children seemed the natural accompaniment. 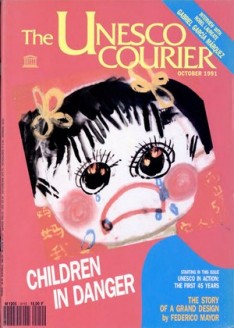