Southern Africa at grips with racism

UNESCO's patient but tenacious and vigorous action ties in with the struggle of the South African blacks themselves, who have shown that with the courage of revolt they have discarded fear and regained hope. If the international community is to remain true to itself, it must mobilize and act firmly in order not to disappoint that hope. UNESCO's position is based primarily on a detailed analysis of the effects of apartheid on education, on culture and on information. What is involved is not just isolated occurrences. Apartheid is a whole, a system, and this system is not the result of chance, it cannot be improved with a little tinkering here and there. It is, like Nazism, the coherent ideology of a racist state which, though it first hits the numerically largest black community, also affects the coloureds, the Asians and the whites themselves. Nobody escapes this master-slave dialectic.

This ideology finds expression in every institution of the Republic. It permeates the educational system at all levels, it is taught in the schools, it is imposed on creative artists and it controls information within South Africa and seeks to control it in other countries as well. UNESCO has repeatedly proclaimed that it is totally and radically opposed to this system. The "respect for... human rights... without distinction of race, sex, language or religion" stipulated in Article I of Unesco's Constitution would lose all meaning if such an ideology were to be tolerated.

Discover other issues and articles on Racism in the UNESCO Courier. 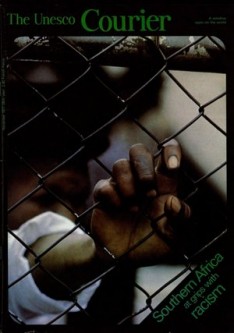